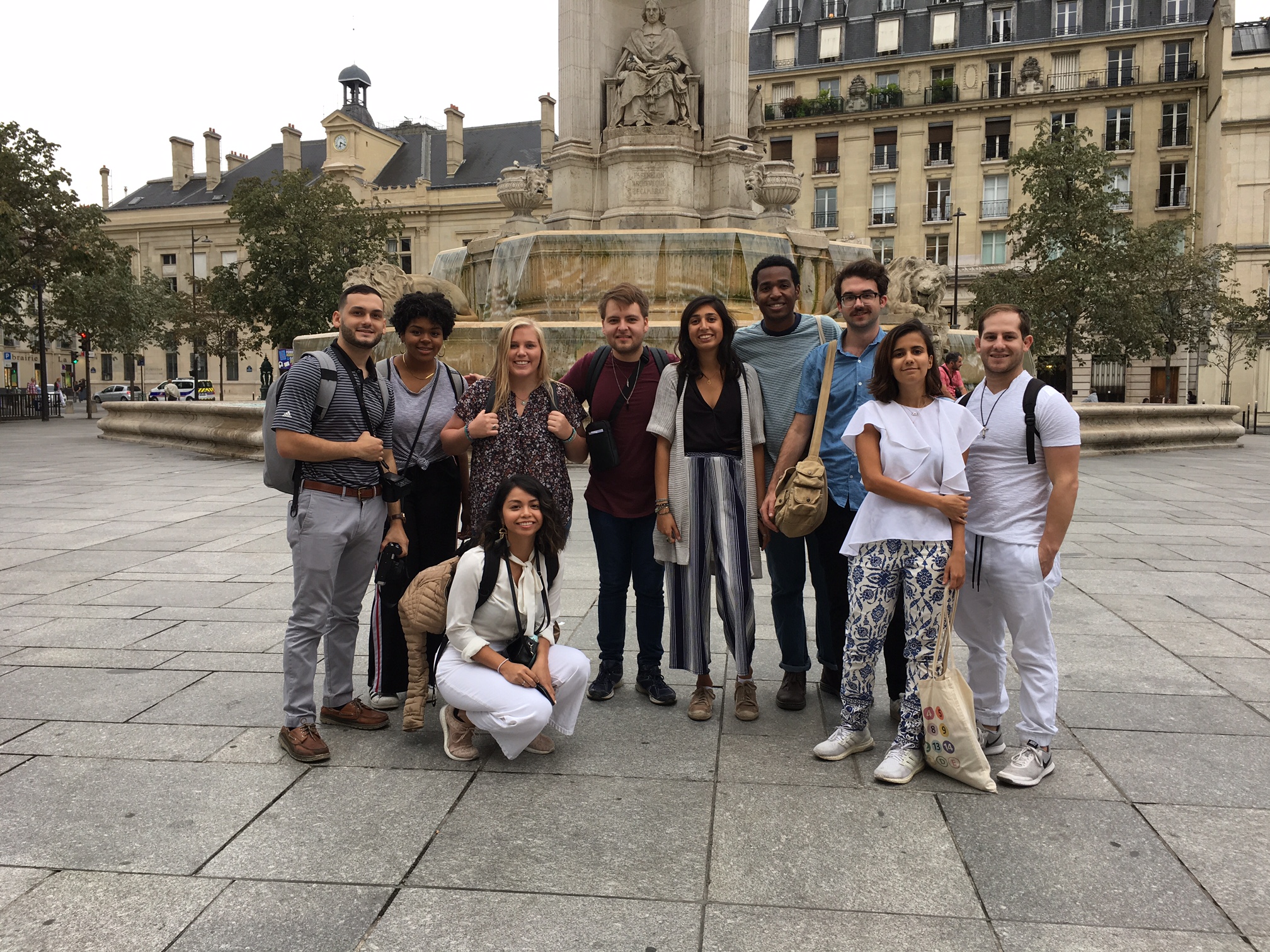 During Orientation week students were assigned a church/cathedral in which to research and present to the studio. On Thursday each student took turns leading the group throughout the city to visit each church in chronological order, ranging from the 6th – 19th century. The Paris Studio walked 10 miles in 7 hours, with only a few misguided directions. 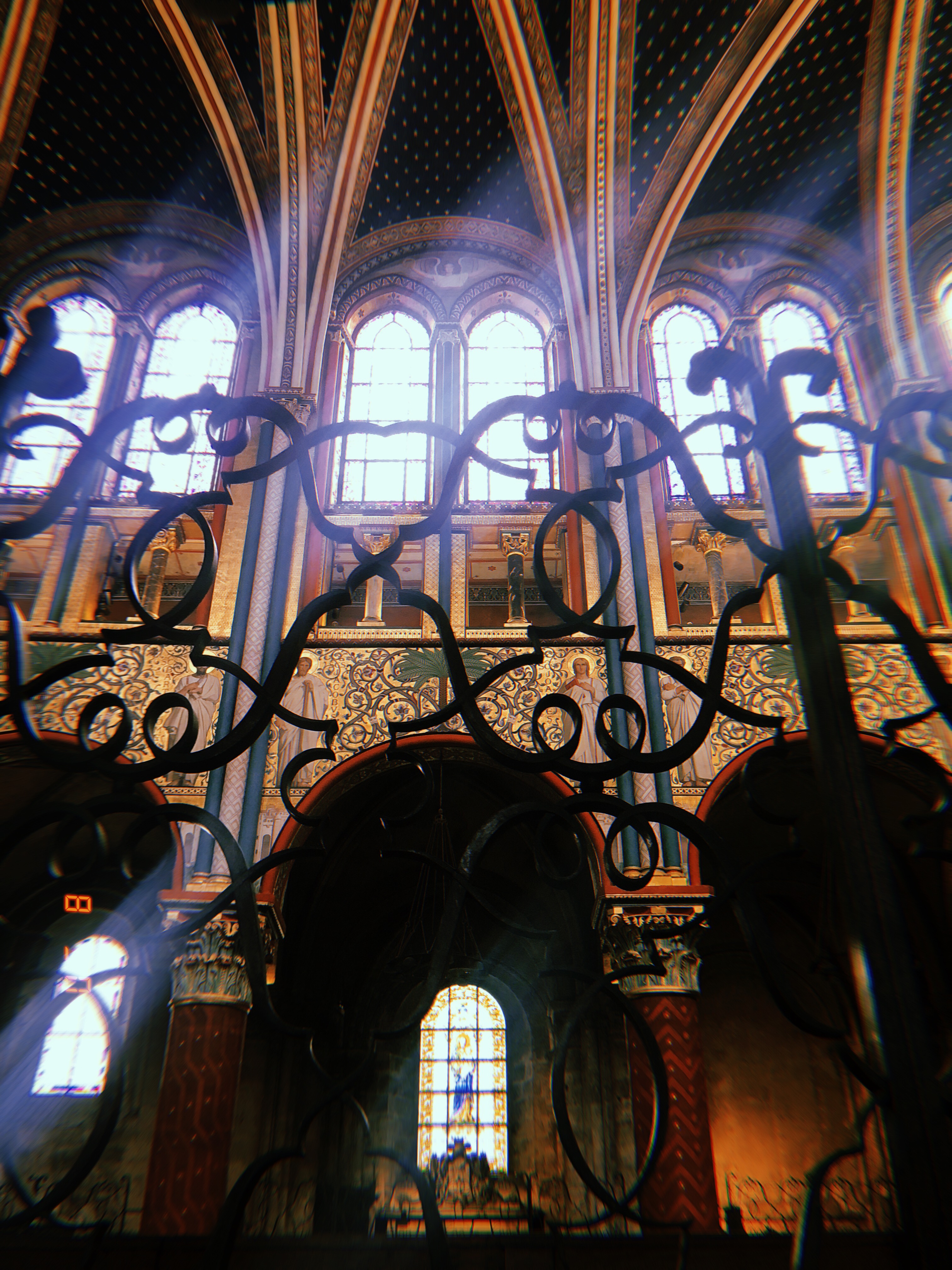 Originally founded by Childebert I as an abbey in 542 AD, the first iteration of Eglise Saint-Germain des Pres’ construction was completed in 558 AD and dedicated to the Holy Cross and St. Vincent. It soon became one of the riches churches in France and by the 9th Century owned most of the surrounding left bank property.  Up until the 17th century the church enjoyed relative autonomy separate from the rest of Paris but then donated much of its land along the left bank, known as the “Fields of Scholars” in order to allow the University of Paris to be built. 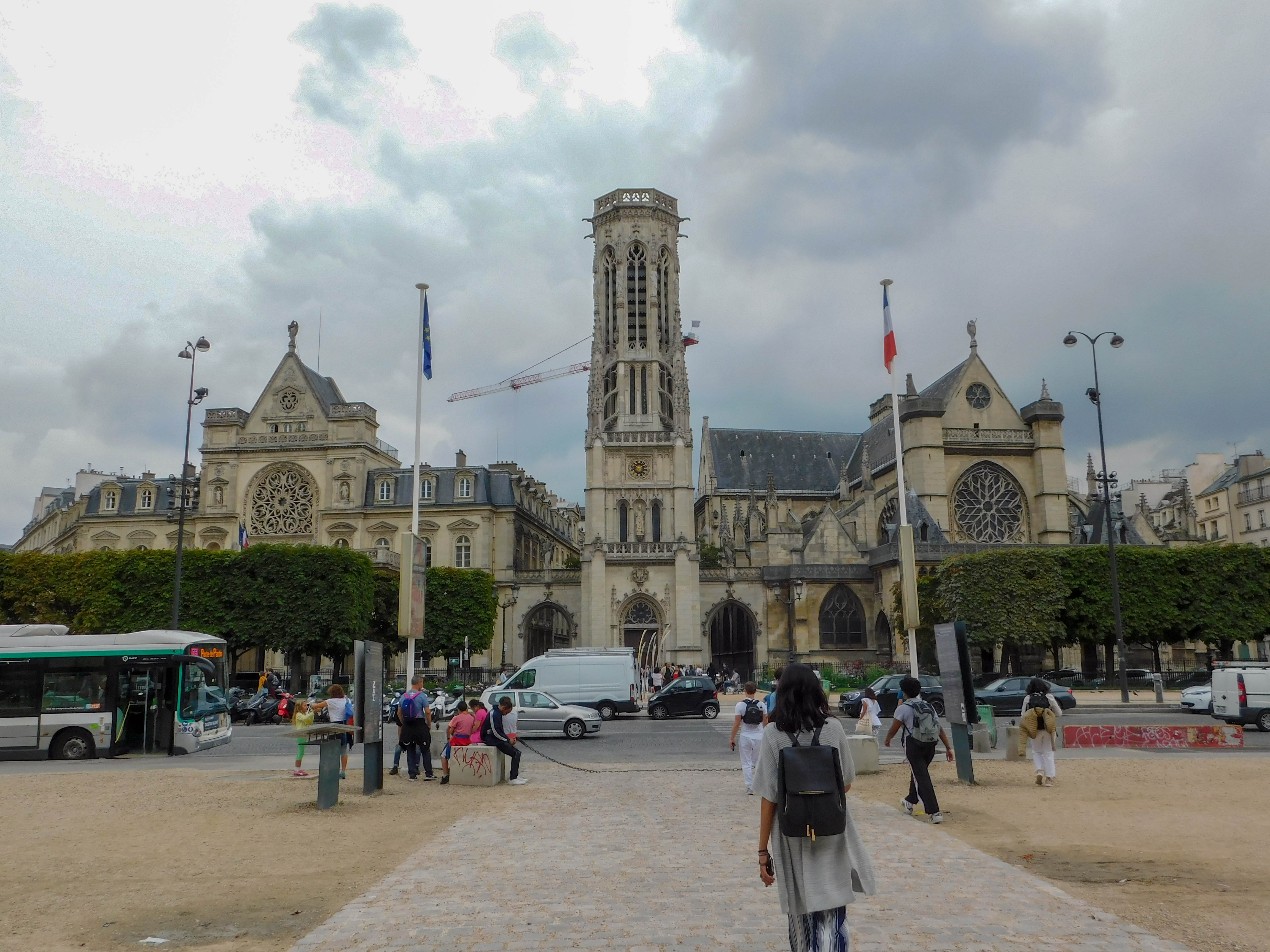 Saint-Germain l’Auxerrois church is a roman catholic church located in Paris at 2 Place du Louvre.  It used to be the ward church for occupants of the neighboring Louver Castle. It was originated in the 7th century, and been rebuilt several times over the centuries. The existing building was constructed in the 15 centuries although some parts of it goes back to the 13th century. 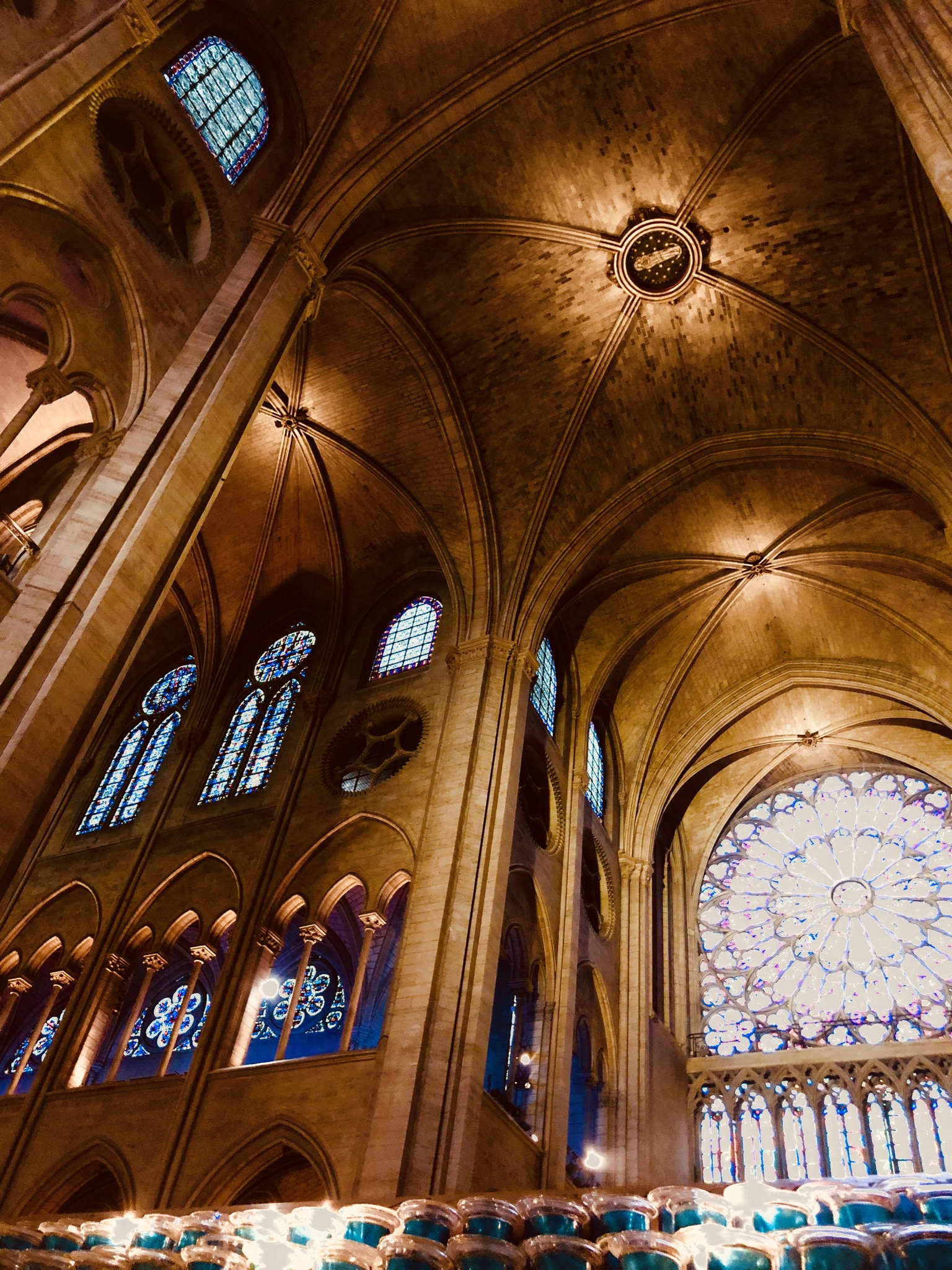 Notre Dame Cathedral is a medieval Catholic cathedral and is widely considered to be one of the finest examples of French Gothic architecture. The cathedral’s construction began in 1160 and was largely completed by 1260, though it was modified frequently through the following centuries. During the 1790s, Notre Dame suffered desecration due to the French Revolution, and much of its religious imagery was damaged or completely destroyed. 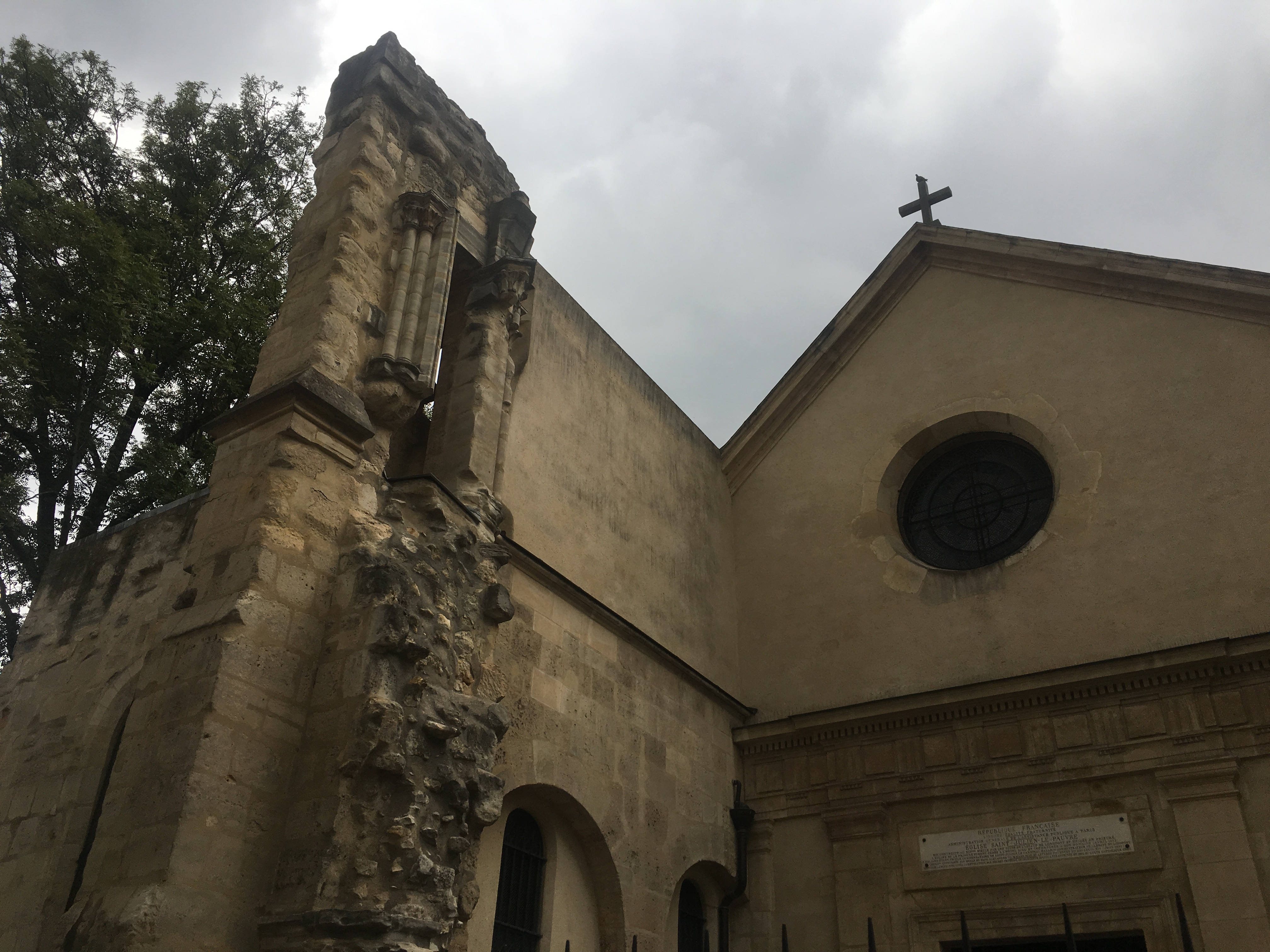 Originally constructed around the time of its massive counterpart circa 1165-1170, St, Julien is among a select few erected in the Romanesque style and it heavily draws inspiration from Notre Dame. It even has piers replicating some found in Notre Dame. Its original building was completed in 1250, but the present building on the site is a collage of old and new completed in stages ending in the 19th century. 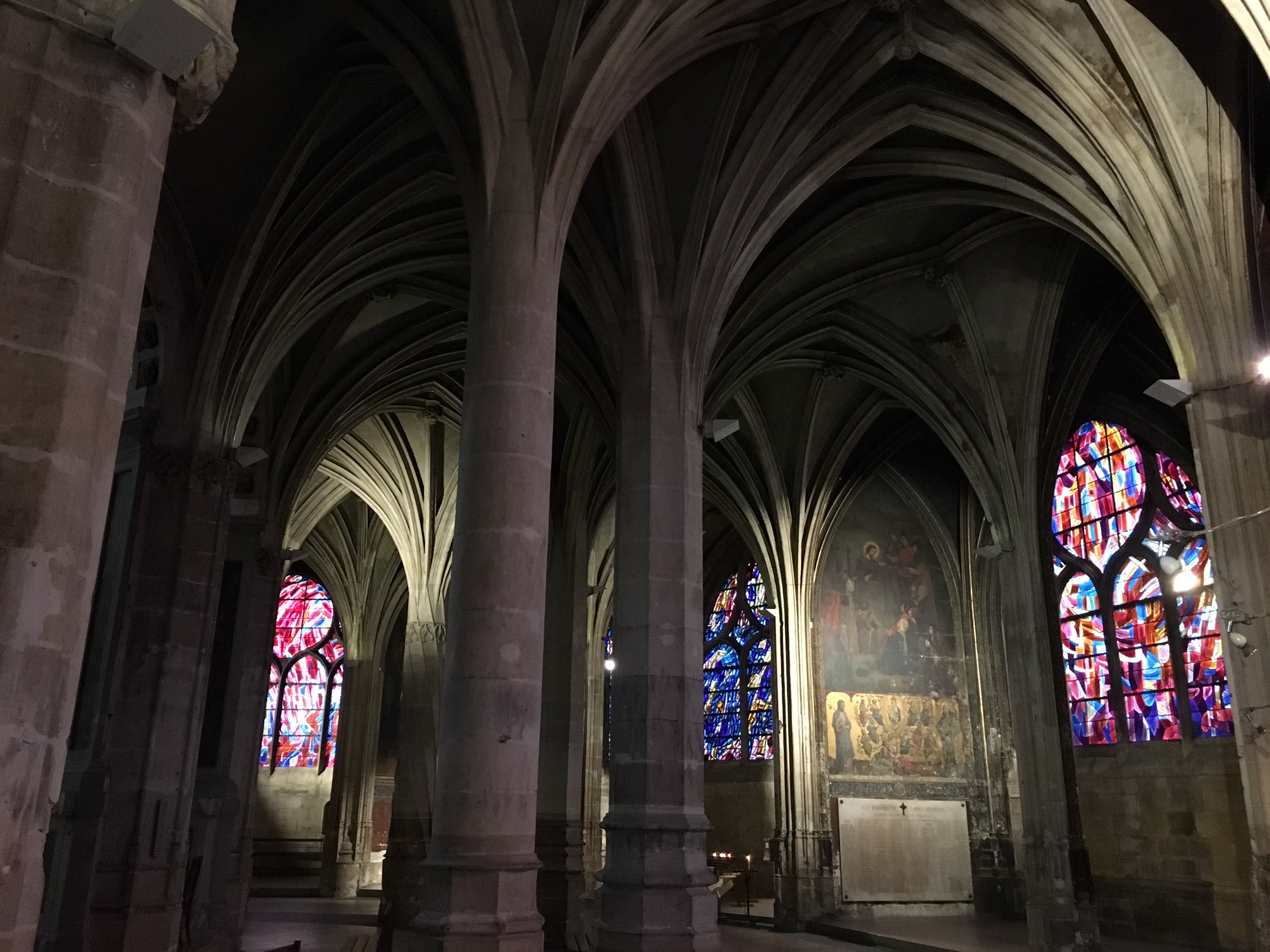 The Church of Saint Severin was started by the Severin of Paris, a devoted hermit, during the early 5th Century.  By 1520, the Church was completed to the look that it is currently, a mixture of all three styles. Its gargoyles and buttresses are one of the more unique features that cover the front main columns. In the interior the columns are in a form to symbolize palm trees by having several split edges. The interior stain glass windows are not the traditional types which usually depict religious scenes but rather an abstract rainbow of colors to filter the daylight perfectly. 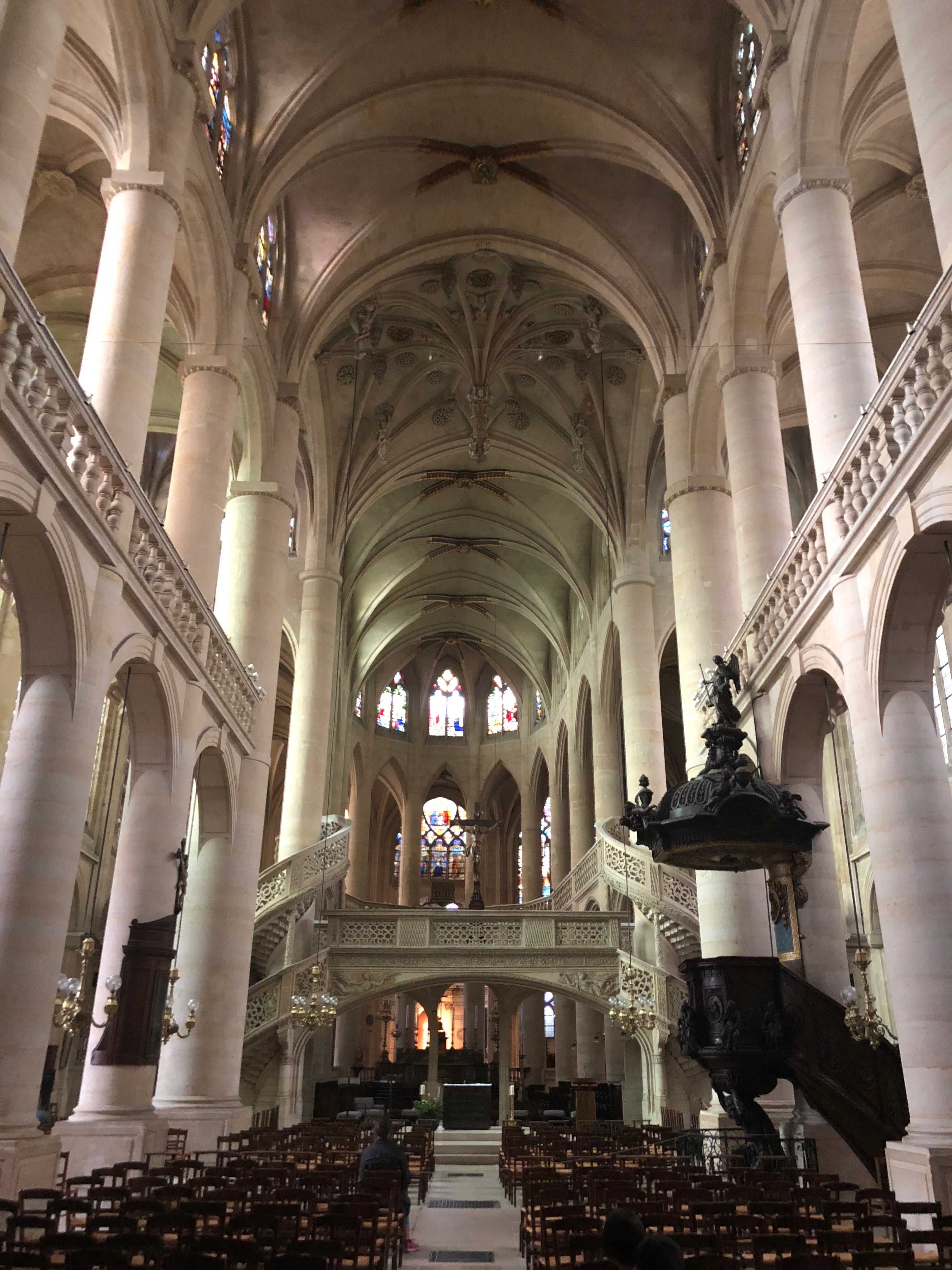 Located in the 5th Arrondissement on the left bank of the Seine River, St. Etienne Du Mont sits on Place Sainte Genevieve as a shrine of St. Genevieve who serves as the patron saint of Paris.  This chapel orginally existed as the Abbey of Saint Genevieve until 1222 when it was declared a church devoted to Sainte Etienne.  Architecturally, the façade, the apse, and the choir screen are significant elements of this chapel.  The choir screen serves as a noteworthy element of the church because it is the only screen that still exists in Paris. 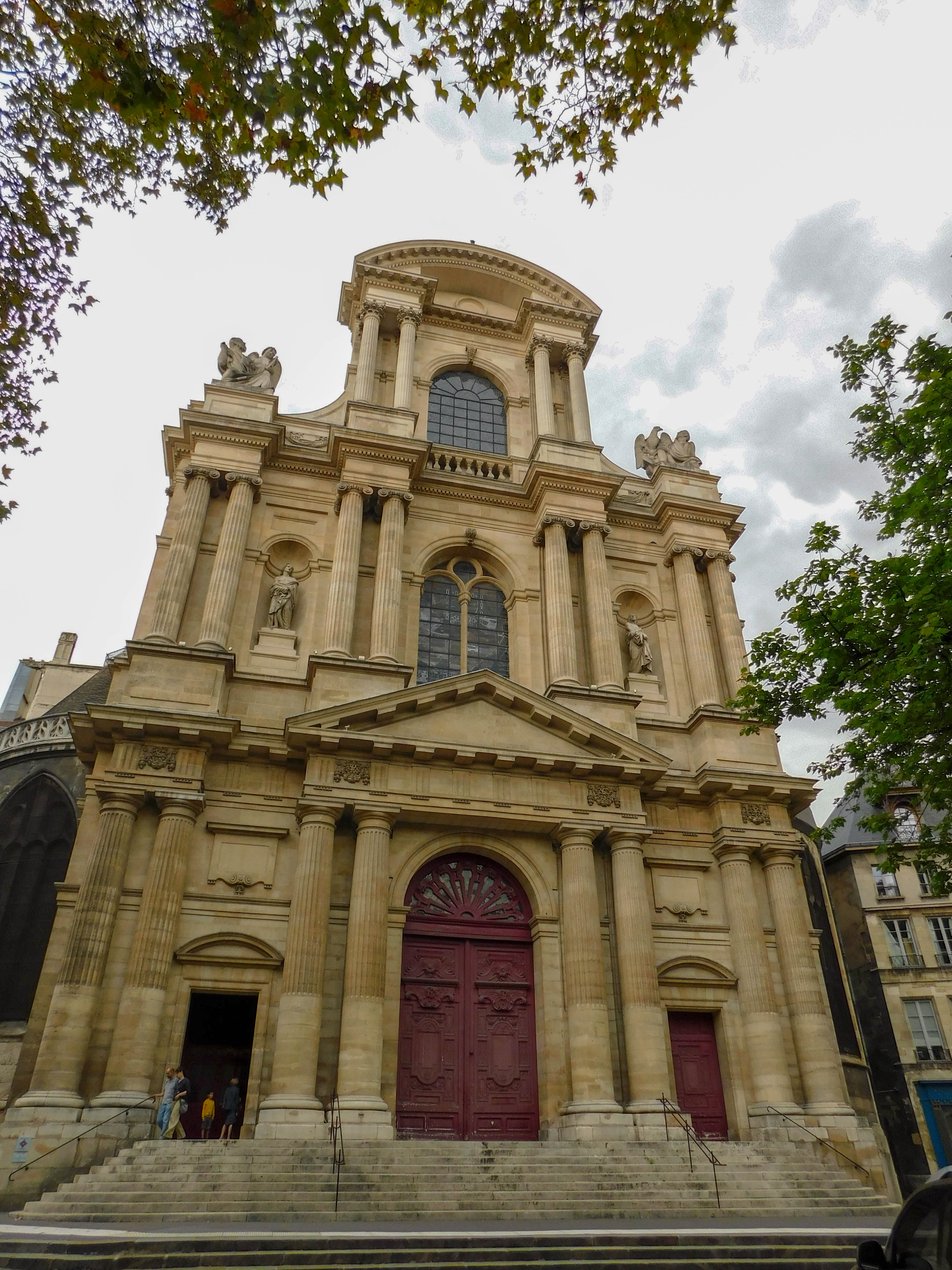 Dedicated to the twin Roman officers who were martyred by Nero in the 1st century AD, the church we see today was constructed from 1449-1660’s, due to the War of Religion and a lack of funds.  However, the drawn out time frame allows for St. Gervais-St. Protais to be a perfect example of the evolution of French architecture.  Located on the Rive Droite, or Right Bank, St. Gervais-St. Protasis initially served a small fishermen village in the Marias, meaning marsh/swamp land. 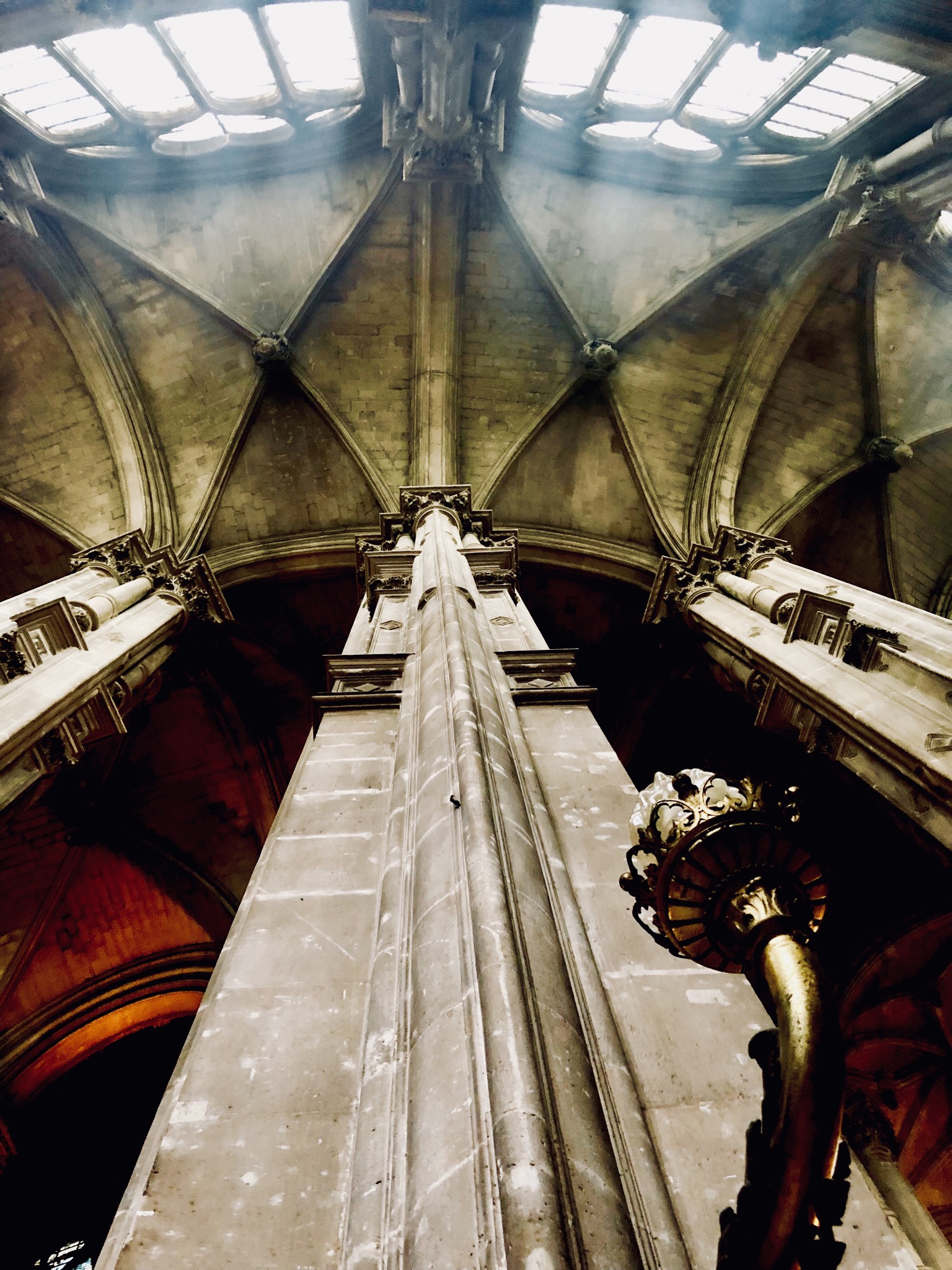 The Eglise Saint Eustache is known for its unique large dimensions which makes it more like a cathedral than a church. It is one of the most visited sites in Paris because of its beauty and the work of art is houses such as the statue of the virgin and child of Prague. Saint Eustache was originally built in 1532 and then restored in 1890.  Saint Eustache uses a variety of styles; the façade is Gothic while the interior is in the Renaissance and classical styles. 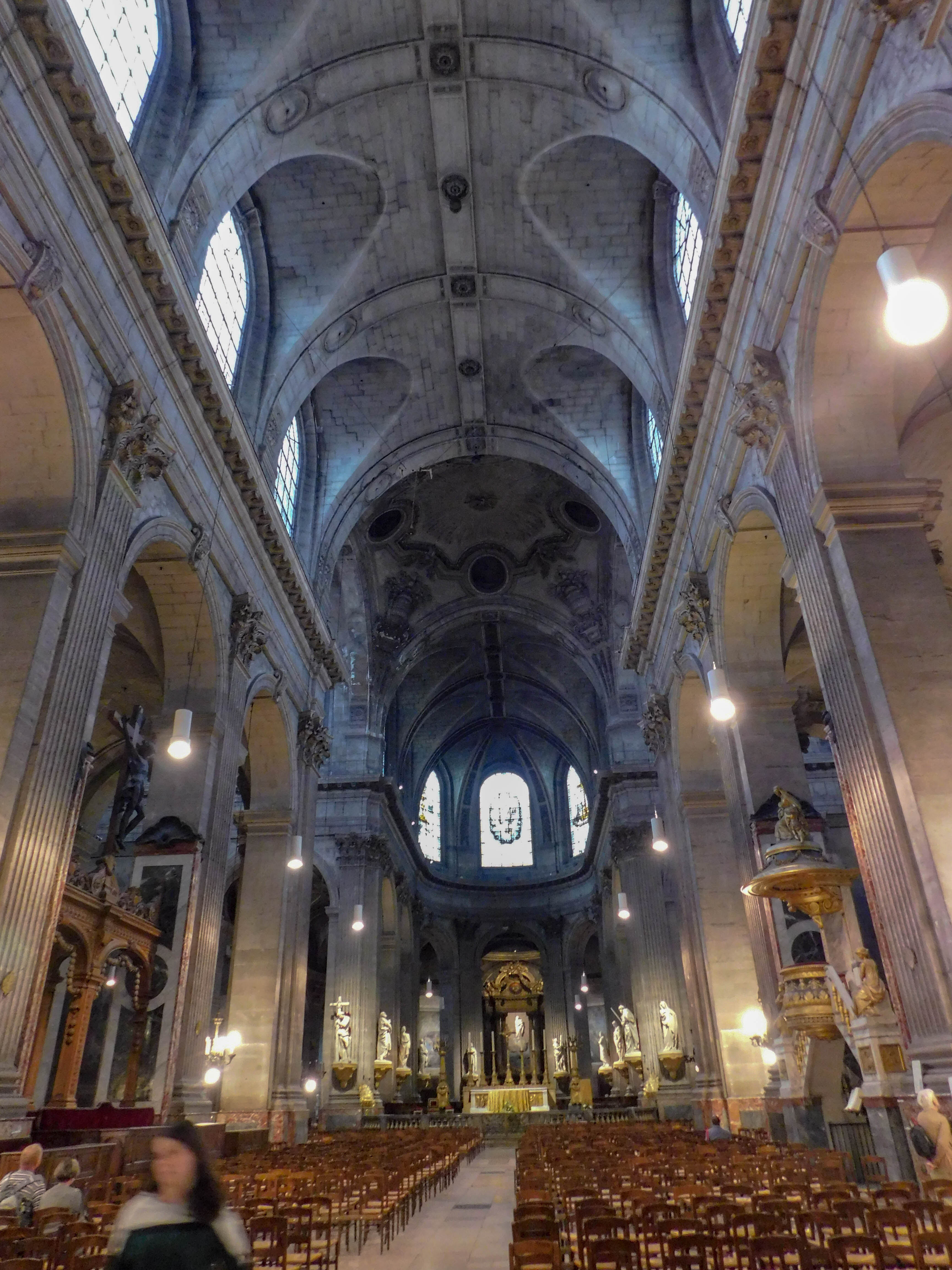 Saint Sulpice is a 17th century Roman Catholic church located in the 6th Arrondissement of Paris.  The church’s construction began in 1646, but didn’t officially and until 1870.  It is dedicated to Sulpitius the Pious, the Bishop of Bourges.  The church is actually the second largest church in the city since it is only slightly smaller than Notre Dame de Paris. 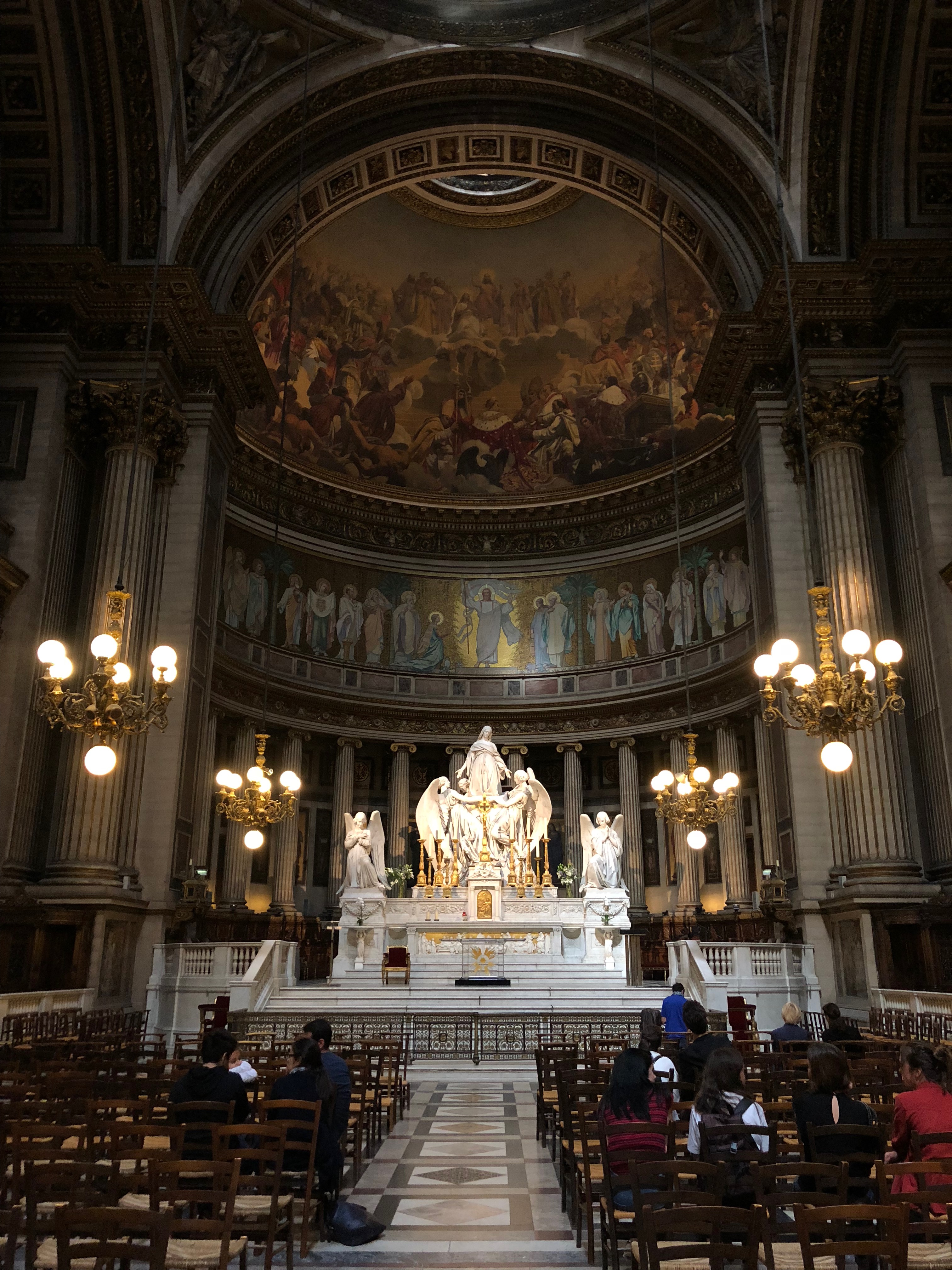 The style of La Madeliene is Neo-Classical which was very much inspired by the Mason Carree in Nimes. This was one of the earliest Neo-Classical buildings to imitate the a Roman Temple in its external form. It has 52 Corinthian columns, 20 meters in hight, that carry the entire building. The pediment of the Last Judgement was designed by Philippe Joseph Henry Lemaure. The main bronze doors represent the Ten Commandments and are 154 feet long and 141 feet high. The pipe organ was built by Aristide Cavaille-Cole in 1845. There is a single nave with three domes over wide arched bays and lavishly gilded décor, which was inspired by Roman baths and were influenced by Renaissance artists. 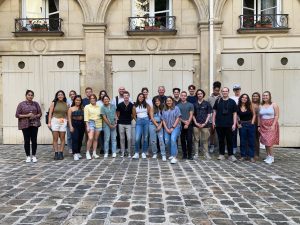 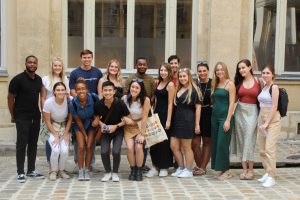 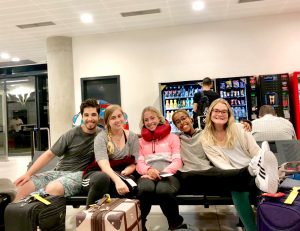